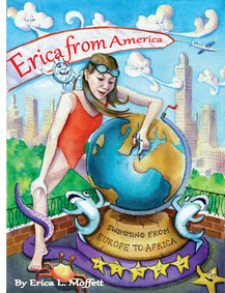 Erica L. Moffett, author of the book "Erica From America ... Swimming from Europe to Africa," inspires kids in Princeton to reach for their dreams

Erica visited from Manhattan and read to the children participating in the YWCA Princeton at two of their locations. She then engaged the kids with a discussion about her adventures and answered their questions about the book and her life as an adoptive child.

"From the moment Erica began to speak with the children, she connected with them and them with her. Many of the students identified with her on so many levels."

In addition to being an author, Erica is an accomplished swimmer. She is being featured in the current issue of Swimmer's Magazine and she is one of only about 142 individuals that has completed the triple crown for open water swimming. Erica an inspiring woman who fascinates children with her story and encourages them to reach for their dreams.

“Having Erica to our program was both inspiring for adults as well as children. Her storytelling was a great activity for the children to learn about adventure and life story. They identified with her story from childhood and her swim. All their questions were answered with enthusiasm, patience, and caring attention," says Clara King, Administative Assistant, YWCA Princeton.

Here's some of the feedback from the kids:

“She is just like me, a swimmer and I am adopted, too.” Third-grader from Lawrence

“Ms. Erica is all grown up and still likes to do exercise.” Third-grader from Princeton site

“She wrote in our books so all the children can read her story.” First-grader at Princeton site

"She showed us the pictures as she read.“ Kindergartner from Princeton site

"I was so excited about spending time with the YWCA kids and remember how much of an impact some of the authors in my youth made on me. To see them engaged and inspired is the most rewarding feeling in the world," says Erica.